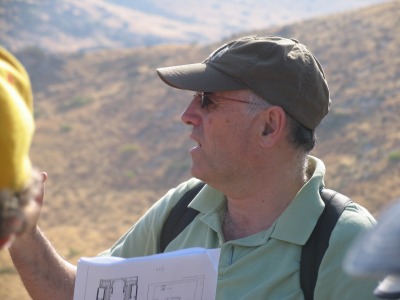 Trained as a Classical archaeologist at the Hebrew University of Jerusalem, where he received his Ph.D. in 1995, Zeev Weiss specializes in Roman and late antique art and architecture in the province of Syria-Palaestina. His interests lie in various aspects relating to town planning, architectural design, mosaic art, synagogues, Jewish art, and public spectacles, as well as the evaluation of archaeological finds in light of the socio-cultural behavior of Jewish society and its dialogue with Graeco-Roman and Christian cultures. Weiss employs an interdisciplinary methodology in his research, integrating archaeological finds, artistic representations, and literary sources.

Weiss’s ongoing excavations at Sepphoris since 1990 have uncovered the remains of the ancient city that flourished from the Roman period and throughout late antiquity. The wealth of evidence emerging from Sepphoris, one of the major Galilean settlements, illustrates the glorious past of this large and prosperous city that housed a mosaic of cultures. The wide spectrum of its architectural features, artistic expressions, and small finds affords abundant insights into the relationship between Jewish society and Graeco-Roman culture, and how the local population conducted its affairs in a period of transition and change—from Rome to Byzantium and from paganism to Christianity. The array of finds from Sepphoris has enriched our knowledge of the contemporary art and architecture in the region and serve as an important reservoir of information for those specializing in Roman and late antique Palestine generally as well as for those studying Galilean sites specifically.

Weiss has written over 100 articles and four volumes, and has co-edited seven books. His first book (co-authored with Prof. Rina Talgam), The Mosaics in the House of Dionysos at Sepphoris: Excavated by E. M. Meyers, E. Netzer and C. L. Meyers, Qedem 44 (Jerusalem: Institute of Archaeology, Hebrew University, 2004), presents the artistic and architectural finds from the House of Dionysos, discusses the iconographical and stylistic sources of the mosaic there, as well as its decorative program, meaning, and ownership. His in-depth and comprehensive study, The Sepphoris Synagogue: Deciphering an Ancient Message through Its Archaeological and Socio-Historical Contexts (Jerusalem: Israel Exploration Society, 2005), describes and analyzes the Sepphoris synagogue and its mosaic, which he excavated together with the late Prof. EhudNetzer.

Weiss’s Public Spectacles in Roman and Late Antique Palestine (Cambridge, MA: Harvard University Press, 2014) is a socio-cultural and historical inquiry into the world of entertainment that affected the cultural lifestyle of many generations in ancient Palestine, from its inception during the reign of Herod the Great until its decline and complete disappearance 600 years later, at the end of Justinian’s rule. His upcoming book, Sepphoris: A Mosaic of Cultures, provides, for the first time, a comprehensive and up-to-date picture of the Galilean city, its buildings, and inhabitants in a thousand-year period of transition and change.

Other publications are devoted to the Galilee and the local Jewish and non-Jewish populations residing in the villages, towns, and cities of the region from the time of Herod the Great throughout late antiquity. Weiss covers a range of topics pertaining to Galilean society’s material culture and cultural behavior, as well as the history of the region throughout antiquity. His articles relating to the ancient synagogue discuss its architectural layout, artistic decorations, liturgical furniture, communal leaders, as well as intercommunal relationship between Jews and Christians in late antique Palestine.